Dharma in the Land of the Rising Sun 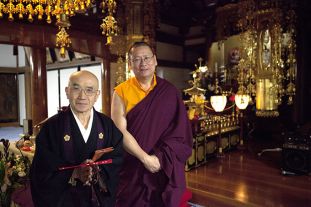 Ven. Lama Dondrup Dorje visited Japan in April 2014 to give a series of Teachings in Nagano and Tokyo. 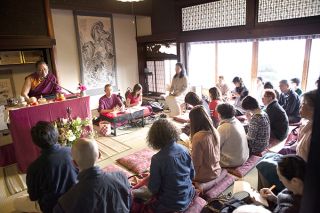 In Nagano, which hosted the events of the Winter Olympics, Ven. Lama Dondrup Dorje gave a concise teaching on the essence of the Diamond Sutra at the (清龍山長円寺) – a temple which was founded in 1649 (慶安二年、Keian period) and follow the Chisan lineage of the Shingon school (真言宗智山派). The teaching there was well received by a packed assembly of both ordained and lay students. Ven. Lama Dondrup Dorje was honoured at a reception afterward given by the Abbot Kenmyo Miyasato（宮里憲明）.

The second series of teaching on Heart Sutra and Classical Medical Qigong in Nagano was given at Hashimoto Masaya（橋本政屋）- a historical tea house which was built around 1850 at the end of the Edo period. 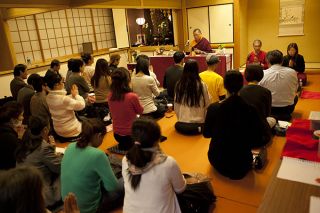 In Tokyo, Ven. Lama Dondrup Dorje gave teaching of Classical Chan Ding Taijiquan in the day time and in the evening, an extensive explanation on the Buddha Nature as depicted in the Diamond Sutra at the Zenkoji (善光寺) – a nunnery which follow the Pure Land tradition (浄土宗).

Since the visit, a Pathgate Study Group has been set up in Nagano and Ven. Lama Dondrup Dorje has already agreed to return to Japan in the autumn to give further teaching to his students there.