New Edition of 'The Life of Guru Rinpoche' Film 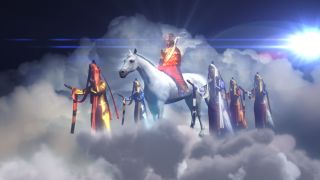 ‘The Life of Guru Rinpoche’ is a 10 hour Tibetan language film in 15 chapters produced under the direction of the late Holiness Penor Rinpoche. It was the wish of HH Penor Rinpoche that the film script be translated into English and the completion of this project was entrusted to Ven. Lama Dondrup Dorje. Having spent several years working closely with members of the Nyingma University at Namdroling Monastery, the script has been translated into English and English subtitles to accompany the film are finally ready. The film has been re-mastered into high definition with brand new CGI (Computer Generated Imagery) special effects to replace some of the original set pieces so that the film can offer enhanced enjoyment for the viewers.

A trailer for the film has been released, and the first chapter of the re-mastered film is scheduled to be released in the summer, showing the passing into parinirvana of Shakyamuni Buddha and Chenrezig bringing the light of blessing to the country of Tibet. To view the trailer of the new edition of ‘The Life of Guru Rinpoche’, please click here, or visit our Dharma Theatre.