The Filming of ‘The Life of Guru Rinpoche’ in India 2018

This project began when Lama Dondrup Dorje Rinpoche, received permission from his root guru, the late Holiness Penor Norbu Rinpoche, to translate the Tibetan script of the film ‘The Life of Guru Rinpoche’ into English. The original film has 15 chapters and was produced under the direction of the late Holiness Penor Rinpoche. The entire film was shot in India and the cast were all monks from the Namdroling Monastery.

The Pathgate Editorial Committee has been working on remastering the film in high definition with new visual effects to replace some of the original footages to enhance the production value of the film. As part of this process, the original painted backdrops that are usually used in theatrical stage production are being replaced by digital 3D environments. To achieve this, we needed more location shooting in India that would properly reflect the relevant architecture within the film. There was also a need to film additional footages that require a cast of more monks and Tibetans. Under the directive of Lama Dondrup Dorje Rinpoche, it was decided that we would visit Namdroling Monastery as part of the shoot.

Hence, Thubten Loday Gonpo, an ordained member of the Pathgate sangha from the UK and a lay student from Singapore visited India in October 2018. After filming in North and South India at locations such as palaces, forts, grasslands, forests, mountains and waterfalls, they spent the last week of their trip at Namdroling Monastery in Mysore. 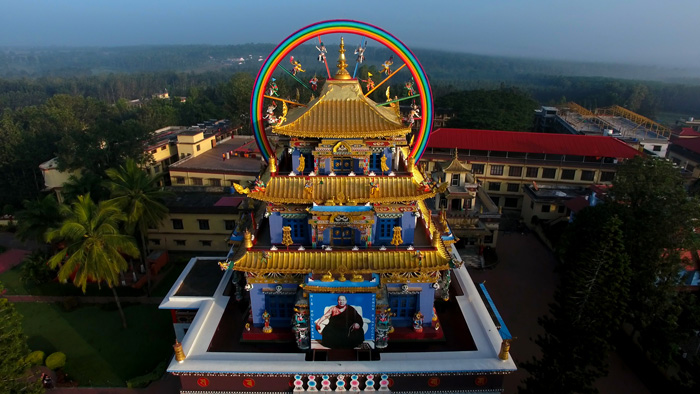 ‘When we arrived at Namdroling Monastery, we first went to pay our respects to Tulku Ajam Rinpoche, a long-time friend of our teacher, Lama Dondrup Dorje Rinpoche. Tulku Ajam Rinpoche was a key person heavily involved in the technical aspects of the original film, and he had entrusted Lama Dondrup Dorje Rinpoche with the master copy of the original film for the remastering process. 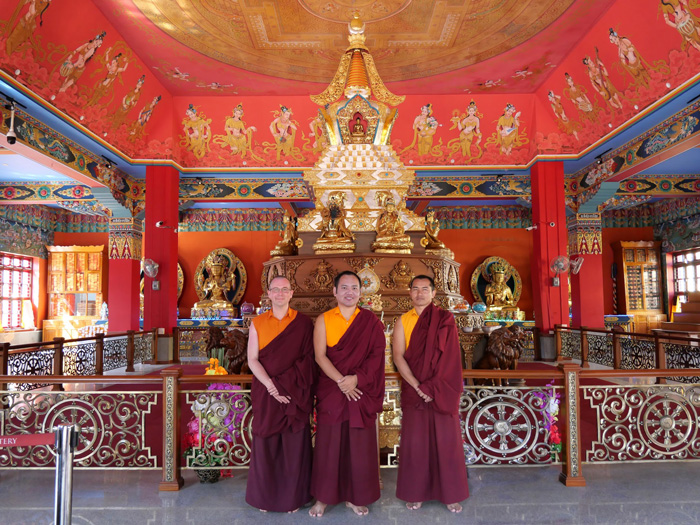 We were then taken on a personal guided tour of The Golden Temple and the Zangdog Palri Temple to see the recent work and restoration completed at the monastery. This included the newly built Relic Stupa of His Holiness the 3rd Drubwang Rinpoche in the Zangdog Palri Temple as well as the new Mandala paintings on the ceilings of the Golden Temple that took them three years to complete. At various locations during the tour, the trustee team pointed out to us that the water tower, the T.T. Namdroling Hospital, the Junior High School, and various buildings within the campus of the Shedra - Ngagyur Nyingma Institute (Higher Buddhist Studies & Research Center) - were supported by funds contributed from Lama Dondrup Dorje Rinpoche. Even Khenpo Sonam Tsewang from the Research and Development committee of the Shedra handed us a book as a gift to pass on to Lama Dondrup Dorje Rinpoche in appreciation of the funds that he gave the committee to start off their work years ago. It was heart-warming to hear such fond memories that the monastery has of Lama Dondrup Dorje Rinpoche despite that in the last 10 years since the passing of the late Holiness Penor Rinpoche, Lama Dondrup has only visited the monastery once in May 2013 for the cremation ceremony of the late Holiness Penor Rinpoche. 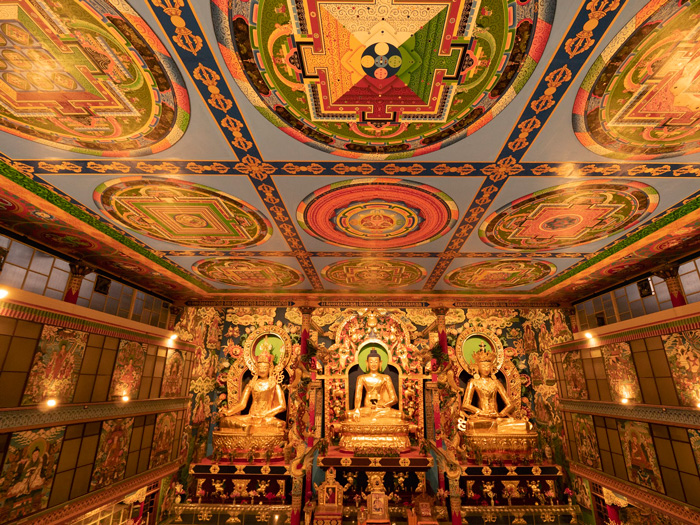 While at Namdroling, we were very touched that the administration of Namdroling Monastery has worked very hard in preserving the legacy and the tradition laid down by the late Holiness Penor Rinpoche. We frequently heard about the compassionate activities of His Holiness Penor Rinpoche in taking care of the needs of the ordained community at Namdroling. These activities were very consistent with the activities that Lama Dondrup Dorje Rinpoche does for the Pathgate ordained community.

On the second day at the Monastery, Tulku Choedharr Rinpoche assigned us the support of Lopon Ngawang for the duration of our visit. Lopon Ngawang is fluent in English and guided us around the Monastery’s premises for filming, giving us access to areas that are usually out of bounds. Following a directive from Lama Dondrup Dorje Rinpoche, we were tasked to capture footage of the Tibetan hospital staff. Lopon Ngawang, who holds the role of the hospital administrator, facilitated for this to happen and soon the Tibetan hospital staff were enthusiastically waiting in line to contribute their part. 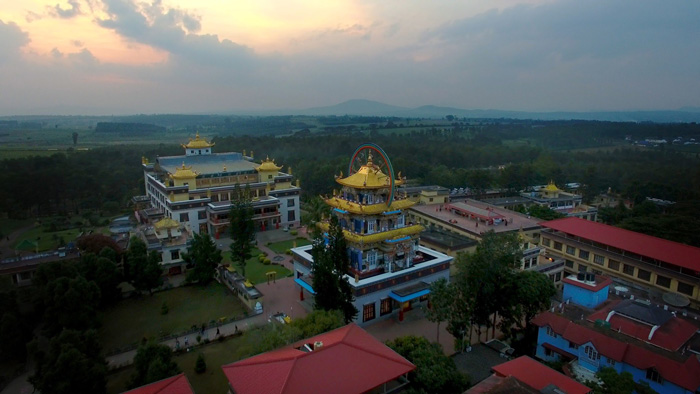 On the last day of the Bum Nga retreat which also happened to fall on the same day of Lhabab Duchen - the festival which commemorates the descending of Lord Buddha back to earth after giving three months teaching to Queen Maya and the heavenly beings in the Thirty-Three Heaven - we received a directive from Lama Dondrup Dorje Rinpoche to film the Tibetan participants of the Bum Nga retreat. With the facilitation of Lopon Ngawang, all the Tibetan Bum Nga participants were soon gathered around enthusiastically waiting to be filmed. They were quickly joined by a large group of teenage Tibetans who were also eager to have their faces captured for the film. 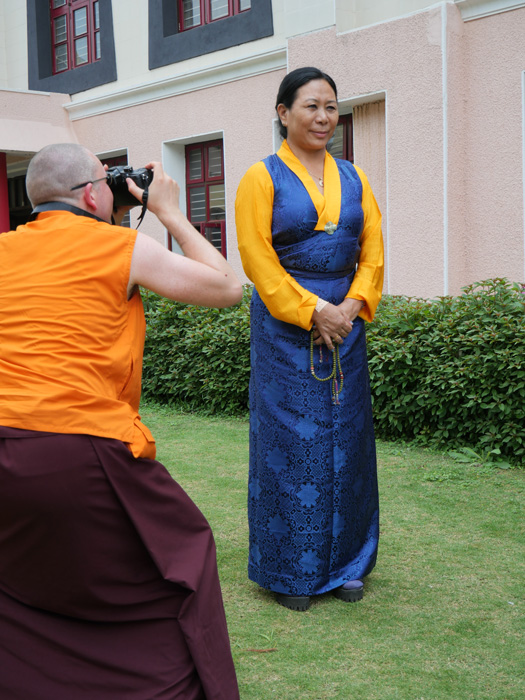 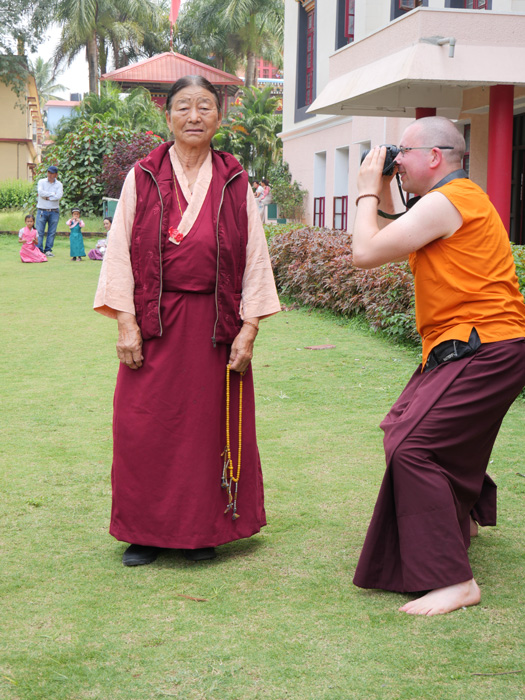 The caretakers of the various temples in Namdroling Monastery were equally supportive and allowed us entrance into different temples after closing hours in order to complete the filming. They kindly provided us not just access within the premises, but also allowed us to take as much time as needed.

On occasion we had the opportunity to practice khorwa (circumambulation) and to sit quietly in the Zangdog Palri temple. Sitting before the Relic Stupa of His Holiness Penor Rinpoche, we got a sense that His Holiness’s blessing is still very much present and brought us a sense of peacefulness and quietness that helped settled our minds. 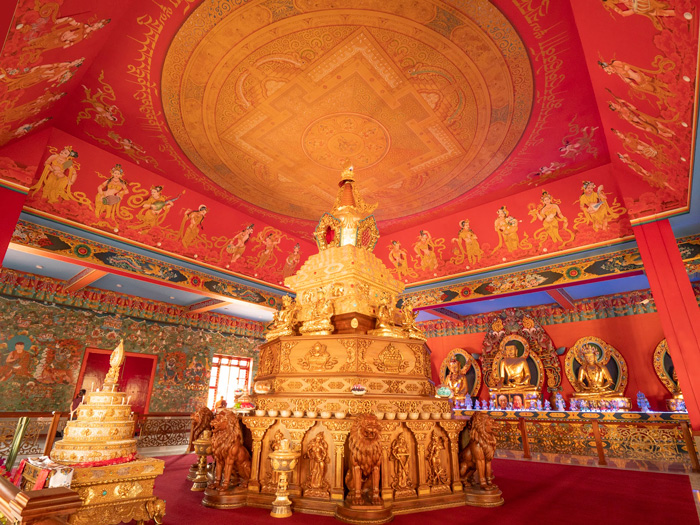 We were also very fortunate to be taken to the lake where the original film shot the footage of the young Guru Rinpoche being born in a lotus. Lopon Pema recounted to us that when they shot this scene, some Tibetans were passing by on the other side of the lake and started to prostrate. Despite the passing of time, we were very touched to hear the accounts of how much hard work and how little resources they had back when the film was first shot. We deeply respect the dedication that was involved in the original production and this inspires us to uphold our commitment to the remastering of the film. 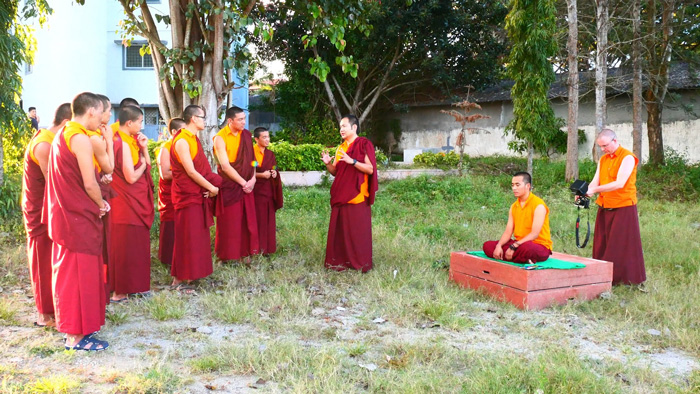 Towards the end of our visit in Namdroling Monastery, we had to complete the task of filming 50 monks. With the kind support of Tulku Choedharr and the Shedra’s treasurer Lopon Penpa Tsering, they helped organized Bum Nga participants and Shedra monks to gather at the filming location for us to capture their footage. We were also very touched when Lopon Pema, who was also a cast in the original film, stepped forward to voluntarily have his footage taken.

On the morning that we were to leave Namdroling Monastery, we stopped by Tulku Choedharr Rinpoche’s office to thank him and his team for their kindness and warm hospitality for accommodating our requests. Tulku Choedharr Rinpoche then extended his farewell gesture by offering us monastic gifts and entrusting us with precious items to offer to Lama Dondrup Dorje Rinpoche.

We were also able to visit the Ani Gompa (nunnery) and had the opportunity to pay our respects to the recently constructed stupa of the late Holiness Penor Rinpoche. Seeing the many construction works undergoing, we were reminded of the many past supports that our teacher Lama Dondrup Dorje Rinpoche had contributed to the Ani Gompa, thus making the premises conducive to the nuns’ living and practice environment. 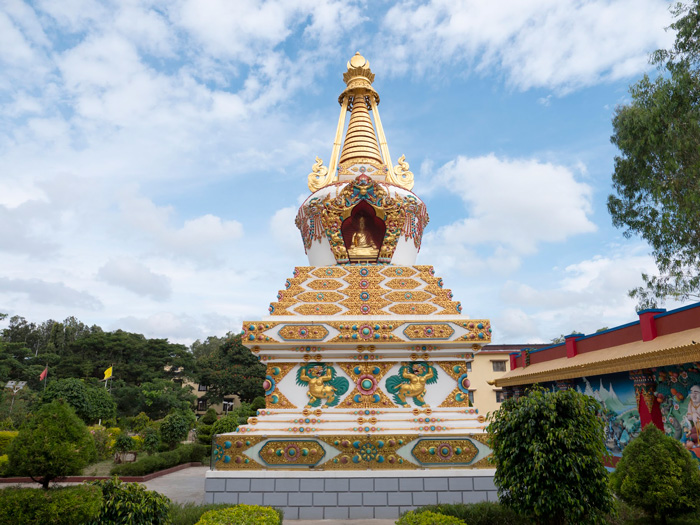 I am truly humbled and grateful for the kind support and warm hospitality received at Namdroling Monastery during our visit. We were told how fortunate we were as there were previous requests from foreign students who sought permission to film the Monastery and their requests were declined. This made me reflect that the kindness and support that were extended to us by Namdroling Monastery is clearly a direct result of deep trust and high regard of our teacher Lama Dondrup Dorje Rinpoche in the monastery.