Gem of Wisdom for Daily Reflection: “Openness attracts openness. Sincerity and truthfulness are the foundations of authentic relationship; whereas fear, the sign of obscuration, is its biggest foe.”

During 2018, Lama Dondrup Dorje Rinpoche continued to support Pathgate students around the world, travelling without a break to give Teachings at Pathgate Centres and venues across Europe and Asia. While in Romania, on 19th April 2018, Lama Dondrup Dorje Rinpoche fulfilled a request to visit and open a new Buddhist Centre, ‘Bodhi Dargyeling’ in Pitesti, 120km north west of Bucharest. 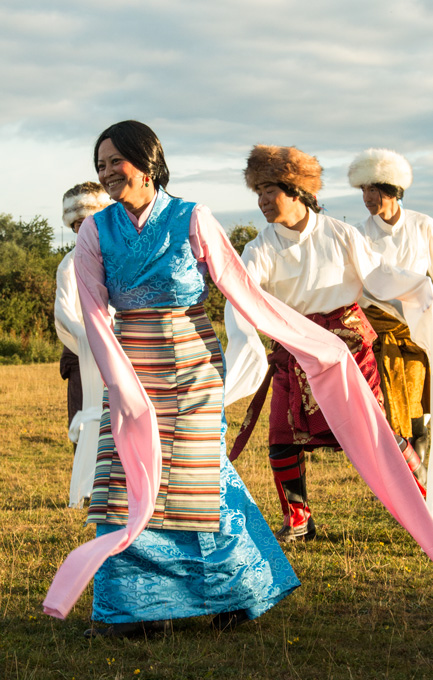 The main pause in Lama Dondrup Dorje Rinpoche’s travel schedule came in the summer, when he spent nine weeks leading the Pathgate Summer Retreat in England, with students gathering from around the world to participate. In addition to the daily routine of teachings, prayers and pujas, physical activity, quiet sitting and audio teachings; students all took part in work on remastering ‘The Life of Guru Rinpoche’ film. Many students spent their evenings rotoscoping, while others worked on costume production and took part in filming at our in-house green screen studio, built with a suspended harness to film flying dakinis, and props to simulate boats, thrones, animals and the like. Outdoor filming often started at 5am, and often continued on into the evening. Work on ‘The Life of Guru Rinpoche’ film also continued throughout the year, with location filming on the English coast, in the Lake District and Scotland, safaris in England and India, location filming in India, and shopping trips for costumes, fabric and props in England, Italy, Romania, Singapore, China, Japan and Australia. Many costumes were purchased, or made to order in Cheng Du, the gateway to Tibet, and others were made by lay and ordained students working throughout the year.

Chapter Two of the film has now been released and has been seen and commended by HH Karma Kuchen Rinpoche. Please click here to see film releases to date.

Daily Audio Teaching continues to be offered each evening at the Newcastle Pathgate Centre and have been made available to Lama Dondrup Dorje Rinpoche’s students around the world via a student website.

The Pathgate Partnership Programme continued to sponsor education and facilities for the young and the ordained. Essential support continues to be offered to the elderly and the homeless. All this is made possible by the generous support of students and friends of Pathgate Institute worldwide. If you wish to support the Pathgate Partnership Programme and become a Friend of Pathgate International, you may do so by clicking Make an Offering.