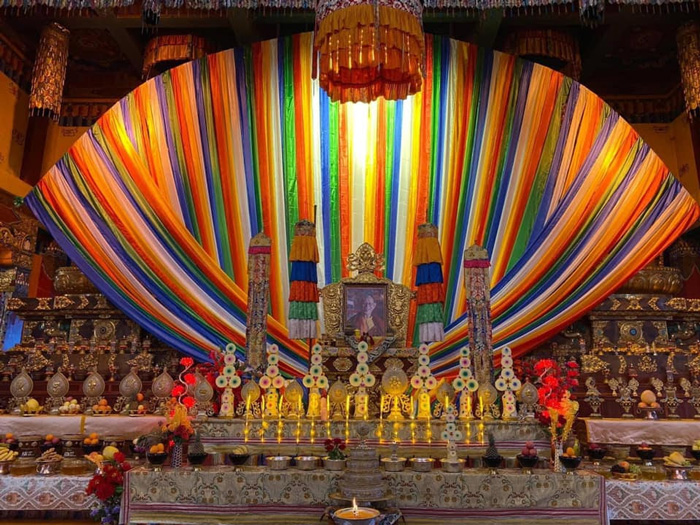 The lord of all beings of degeneration time and sovereign of all mandalas, the source of common and extraordinary siddhis, and guru of unfathomable kindness to Buddhist tradition in general and particularly to the Nyingma and Palyul tradition. His Holiness Tulku Thubten Palzang Rinpoche passed into mahaparinirvana on the 10th of January, 2021 (27th day of 11th Tibetan month), dissolving the display of his enlightened mind into Sphere of Ultimate Reality. This is a greatest loss to all the followers of general Buddhist tradition and the Nyingma and Palyul lineage in particular. This has left all his disciples in grief.

Now is the time to make prayers with unshakable devotion. Therefore, to fulfill all the noble aspirations of His Holiness and for his swift reincarnation to benefit all the sentient beings, and to purify all our impairments and breakages of samaya; the supreme heads of Namdroling Monastery, the two Chogtrul and three Khenchens have directed to conduct the following pujas and prayers by the entire sangha of Namdroling Monastery until the mahaparinirvana ceremony is completed:

All the branches of the Palyul centres and faithful disciples around the globe are requested to engage into practice upon one’s capacity as mentioned above. 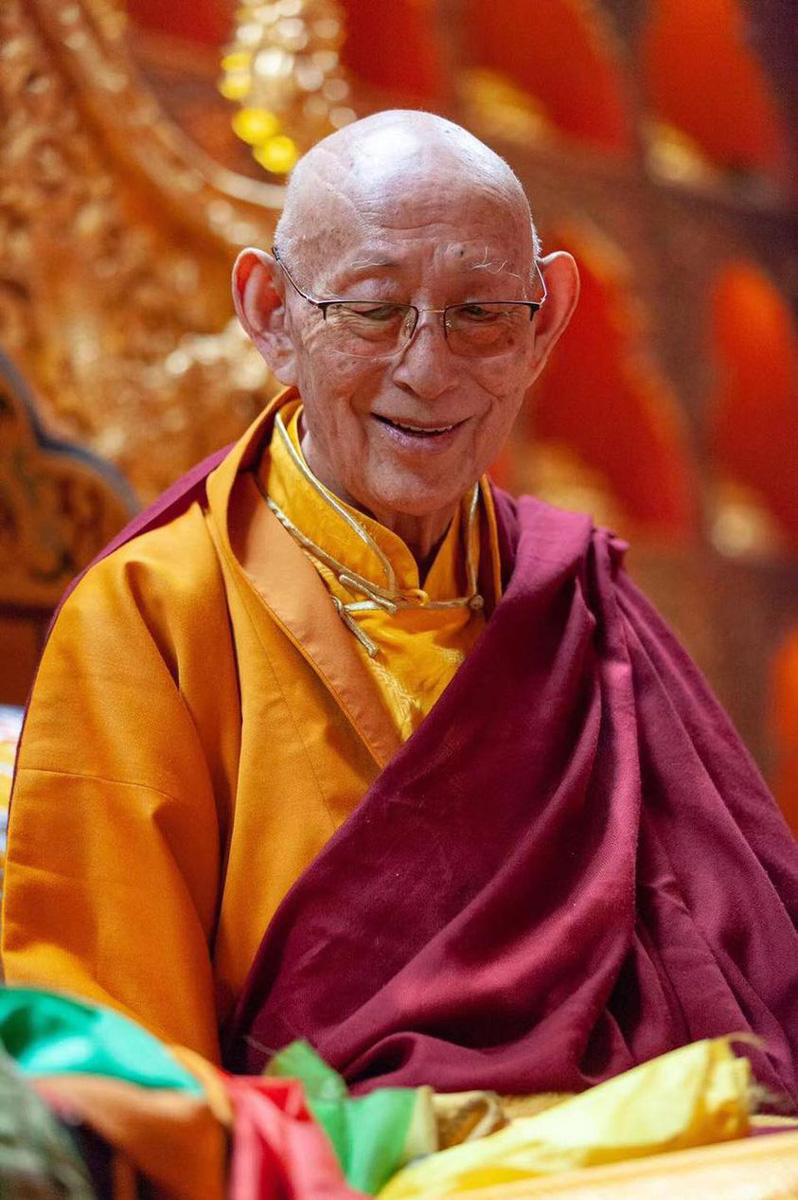 Following guidance given on January 13, 2021 (New moon day of the 11th Tibetan month), by Kyabje Sangye Tsering Rinpoche, reincarnation of the Omniscient Ngagi Wangpo, once Rinpoche awakens from his thukdam (meditative state), his kudung (precious holy body) will be taken to Palyul Monastery and grand prayer offering ceremonies carried out according to the tradition. On February 3, 2021 (21st day of the 12th Tibetan month), a cremation ceremony based on the jinseg (four activities fire ritual) will be conducted.

Kyabje Thubten Palzang Rinpoche (Tulku Thubsang Rinpoche) was born in the year of the Fire Rat (1936). He was discovered by the great Khenpo Ngawang Pelzang. This is the same renowned Khenchen who confirmed the recognition of our late Holiness, Drubwang Pema Norbu Rinpoche.

Tulku Thubsang Rinpoche was a younger classmate and dear friend of His Holiness Drubwang Pema Norbu Rinpoche along with Dzongnang Rinpoche. The three young tulkus studied and practiced as brothers under the direct guidance of Khenchen Ngaga and received teachings and empowerments together from many realized masters. As a youth, Tulku Thubsang Rinpoche was present when His Holiness Penor Rinpoche completed Ngondrö. He has described the single-pointed zeal and physical hardships endured without complaint through which His Holiness completed all of the recitations and accumulations. 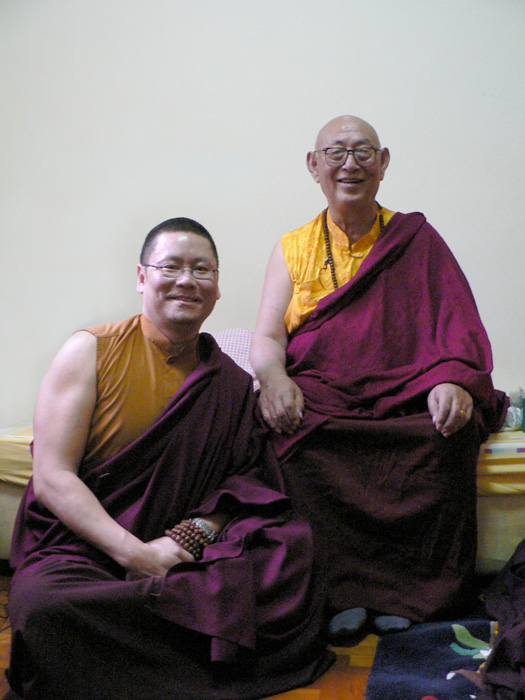 Tulku Rinpoche has spent the majority of his life in Palyul, Kham, Eastern Tibet, overseeing the rebuilding of Palyul Monastery. Through great effort, personal danger and the blessings of all the lineage masters, Tulku Rinpoche has managed to collect texts that were nearly destroyed. The Kama teachings, for instance, were scattered in personal collections throughout the local area and the world. These he assembled in the Palyul Library, and had re-carved into wooden blocks based upon the copies. He has also preserved some of the original wooden printing blocks of the Nam Chö. The original pre-1959 library held wood blocks for 50 volumes. Thanks to Tulku Rinpoche’s hard work, and with the addition of the Kama teachings, the library today holds printing blocks of more than 110 volumes. Because of this effort, His Holiness Penor Rinpoche was able to obtain the texts required to carry through the series of retreats known as Liberation in the Palm of Your Hand, now regularly given in Namdroling Monastery and in the US Retreat Center.

Tulku Thubsang Rinpoche was renowned for his expertise in the detailed instructions of all the ritual activities such as Mudra (hand gestures) and Cham (sacred lama dance) and renowned for his extensive knowledge of the elaborate rituals for Drupchen (twenty-four-hour a day, seven-day prayer ritual) and the Accomplishment Ceremonies that these teachings have preserved.

He was an expert on how to play and teach nearly all of the sacred musical instruments. The monastic retreats within Palyul Monastery, in Kham, are all also overseen by Tulku Rinpoche. Fortunately for us, Tulku Thubsang Rinpoche was able to confer these teachings to hundreds of aspirants, ensuring they are remembered for generations to come. In this way, granting teachings and empowerments based on these texts and based on his knowledge of all of the rituals of Palyul, Tulku Rinpoche spent many years caring for and nurturing the entire Palyul lineage.

Free from the stain of partiality, Tulku Thubsang Rinpoche’s activities were like a great ocean of enlightened conduct for the benefit of the teachings and all sentient beings. For Palyul students, we knew him for his profound humility and for a devotion to and faith in His Holiness Penor Rinpoche so deep and so vast, it makes eyes tear and hearts tremble in appreciation to observe. In the region of Palyul, he has served as His Holiness Penor Rinpoche’s surrogate. Along with His Holiness, he has been a major contributor in preventing these teachings from falling into extinction.

Tulku Thubten Palzang Rinpoche Swift Rebirth Aspiration Prayer in Tibetan with English translation and phonetic is now available for all devotees who wish to include this prayer for his Yangsi’s Swift Rebirth in this their daily prayer practice.