Buddha’s 15 days of Miracles in Losar 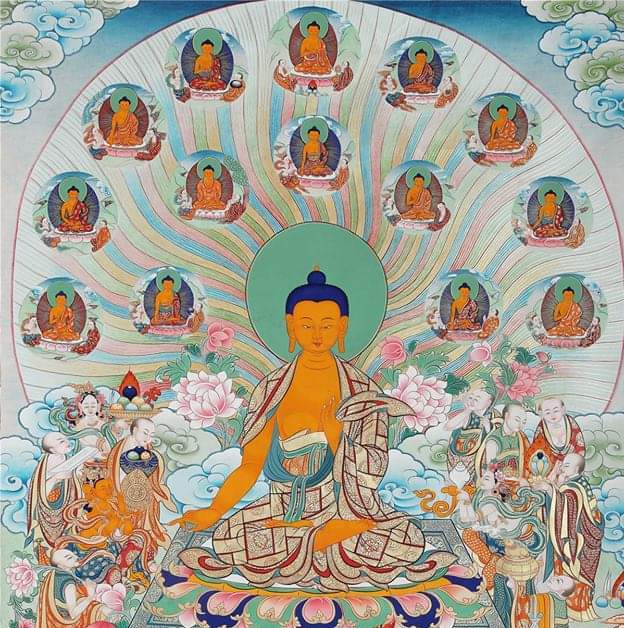 The first full-moon day in the Tibetan New Year (Losar) is known as the Day of Miracles (Chotrul Duchen) to commemorate fifteen consecutive days of miracles performed by Shakyamuni Buddha to subdue the challenges of six heretic teachers (tirthikas) who were advocates of beliefs in total contradiction to the doctrine of Buddhadharma.

On the first day, Buddha placed a toothpick in the ground from which a most magnificent tree instantly emerged from the soil.

On the second day, jewel mountain manifested on either sides of Buddha.

On the third day, Buddha spat a mouthful of water onto the ground upon which a large lake with seven types of precious gems covering the bottom was formed.

On the fourth day, Buddha manifested a pool from which the congregation heard the teachings of the thirty-seven factors of enlightenment from the sound of the running streams.

On the fifth day, golden light emanated from Buddha purified the three poisons of every beings who had the fortunate karmic conditions to benefit in the entire world.

On the sixth day, Buddha made it feasible for everyone present to discern the thoughts in each other’s mind.

On the seventh day, Buddha blessed everyone so that they became chakravartins.

On the eighth day, five wrathful deities manifested and destroyed the thrones of the six heretic. Vajrapani then appeared with flaming vajra which terrified the six heretic to such extreme that they jumped into water and vanished.

On the ninth day, Buddha enlarged his body until his height reached the highest heaven of the Brahma.

On the tenth day, Buddha enlarged his body until his height reached the highest heaven of the formless realm.

On the eleventh day, Buddha’s body dissolved into golden light while his voice gave teaching to the congregation.

On the twelfth day, golden light radiated from Buddha‘s body bringing his teaching of great compassion to every corner of the world.

On the fourteenth day, Buddha transformed flowers that was offered to him into twelve hundreds and fifty gems-encrusted carriages.

On the fifteenth day, Buddha miraculously filled platters with food and expounded all the misery in the world were caused by our own negative actions.

Henceforth, the fifteenth day of the Tibetan lunar new year is referred to as Day of Miracles (Chotrul Duchen). The Festival of Miracles is one of four major Buddhist festivals during which effects of positive and negative actions are multiplied by 10 million times.